Extremity drape pack, including instrument tray cover, surgical gown, hand towel and rubber preparation. The instrument tray cover is set on the instrument tray. The surgical extremity pack also includes a soft rubber cover for wrapping the unsterilized area of the patient’s lower limbs. It is used to cover the non-surgical area and expose the surgical surface, as well as the wrapping cloth used to wrap the accessories in the surgical kit; the shape of the limbs is sleeved or trousers clothes style, the instrument pan cover, surgical gown, hand towels, rubber preparation, extremity drape sheet and soft rubber sleeves are placed together in a wrapping cloth, which is stacked in a square shape and placed in a packaging bag. 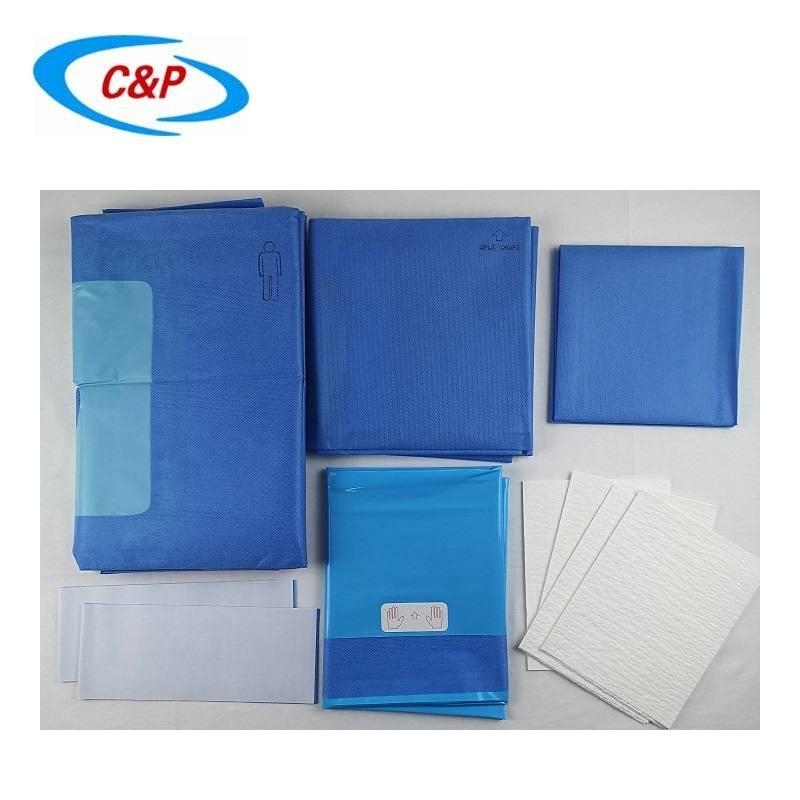 The extremity surgical drapes are made of double-layer PP composite material, the outer layer is PE cast film, the inner layer is spunlace non-woven fabric or SMS non-woven fabric, and the upper or lower limbs of the limbs are covered with non-surgical areas. The holes on the surgical surface are exposed. Soft paper tapes are used around the holes to be fixed around the surgical incision without compressing the limbs. The limb sheets are equipped with liquid collection bags to facilitate the collection of liquid during the operation. The surgical gown is made of spunlace. Woven fabric or SMS non-woven fabric, which isolates and protects between the patient and the doctor, and is worn by the operator; The material of instrument tray cover is PE blowing film, which can be used as seat cover or garbage can as postoperative medical waste storage bag; the material of hand towel is spunlaced non-woven fabric or strong dust-free paper, which is used for wiping before or after operation; the cloth of extremity surgical pack is used as instrument table cloth, and the material is PE cast film composite non-woven fabric.

1. One-time use during surgery to avoid cross-infection between medical staff and patients.

2. The limbs pack centralizes the auxiliary equipment at one time, which is convenient to carry, and is used in limb surgery.

5. After the extremity surgical kit is opened, the cloth is used as an instrument table cloth. After the operation is completed, all auxiliary instruments are wrapped together with an instrument pan cover for disposal as a garbage bag, which is very convenient.